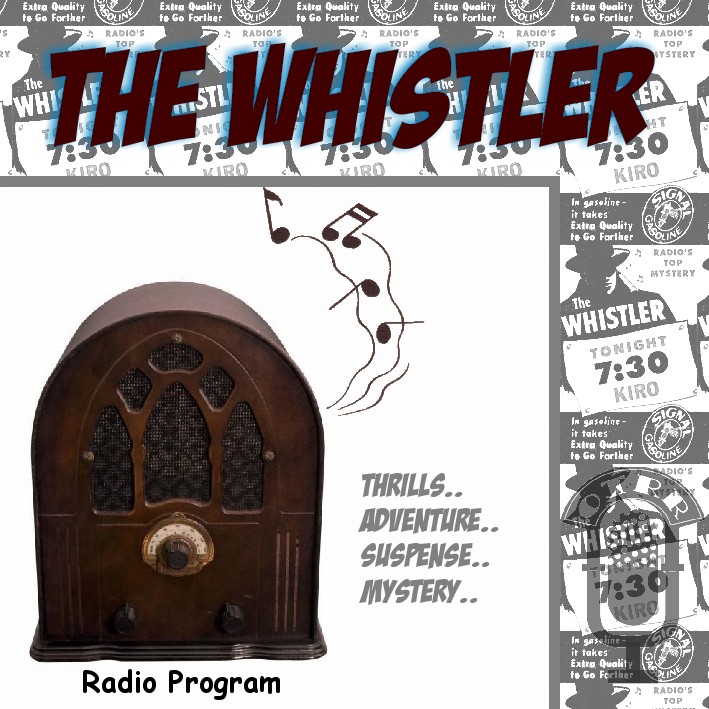 You're walking alone on the street at night, but then you hear another set of footsteps and a haunting tune being whistled by an unseen stranger. Fritz Lang used an similar premise in his 1930s German movie with Peter Lorre playing M, a psychopathic murderer of children. But the American radio series was even creepier. The unseen Whistler didn't kill anyone (that we know of), but he certainly loved watching murders take place, narrating them for us, and chuckling at the suffering of others instead of doing anything to stop it. Unlike M, he was never caught. He kept walking the streets every week for thirteen long years, whistling his ominous thirteen notes and telling us another tale of bizarre fate. Perhaps Fate is who the Whistler really was? He never provided any sir name, and the killer was usually punished by some twist of fate that only The Whistler seemed to expect. It is very likely The Whistler was inspired by The Shadow, which began nearly a decade earlier. Like the Shadow, the Whistler seemed to enter and exit the criminal underworld without ever being seen. He would watch the evil doers carry out their schemes, yet they never saw him, even though he would tell us what they were thinking in their presence. His voice sounded equally sinister to The Shadow, too. It was was a slithering tenor, hissing the "s's" and often laughing "heh-heh-heh-hehheh!" at the foolishness of the guilty. Both series had similar opening lines: The Shadow "knew what evil lurked in the hearts of men", whereas The Whistler "knows many strange tales hidden in the hearts of men and women who have stepped into the shadows." When Bill Forman served 1/2 year in the military, Marvin Miller substituted as The Whistler. Also like The Shadow, several different actors played the title role over the course of The Whistler series. Bill Forman played it the most, but his announcer (Marvin Miller) substituted for him during the six months of his army duty (Buxton, 256). Gale Gordon and Joseph Kearns voiced the Whistler in earlier days, while Everett Clarke played the character in 1947 and Bill Johnstone did in 1948 (Dunning, 719). The last similarity was the saddest one. Both series ended about the time frame (in the mid 1950s). Crime increased in the following decades, maybe because the guilty felt they were no longer being watched and could get away with murder. Or could it be that the Whistler is saving up some more great stories to tell us about in the future? This Article courtesy of http://www.radiohorrorhosts.com/whistler.html.

Reviewer: Den NC USA - favoritefavoritefavoritefavoritefavorite - May 16, 2021
Subject: Please go to: https://archive.org/details/OTRR_Whistler_Singles
This page is not easy to use in terms of getting the actual radio shows. I suggest
https://archive.org/details/whistler-46-02-25-ep-196-murder-in-haste
Sounds like a single show, but this above gets you to the SINGLES listing with each show available and all can be downloaded on right in the menu.
I am a frequent archive.org enjoyer, and an OTR fan, so I've heard many of The Whistler shows. It's a fine show, coming from the West Coast as they let us know... of mystery and suspense, often macabre and crime oriented, and sometimes psychological, as was Film Noir cinema in the 40's and 50's.
It's an excellent radio thriller, and if that's what you're looking for, you'll be very pleased.
IMHO, it's a great series, and each and every show is gripping and tension-filled.
All were done with the best of scripts, actors, and production values. Great for "lights out" listening.
Reviewer: Mukus. - favoritefavoritefavoritefavorite - November 13, 2018
Subject: The Whistler.
The whistler, is NOT like The Shadow, in any way shape or form.
I like it because it keeps you guessing at what happened during the show.
Reviewer: jonfrum - favoritefavoritefavorite - March 27, 2017
Subject: Regarding those descriptive paragraphs above...
Whoever wrote the description of this series above must have been hitting the ganga when they listened to this series. If they ever did listen to it. Total goofball stuff.

Just so you know - this series has absolutely nothing to do with Fritz Lang's M. It's an ordinary radio thrill of its time, much like Escape or Inner Sanctum or Suspense. In this case, it's all crime stories, with no supernatural elements.

The Whistler is certainly NOT similar to The Shadow. In that series, the character of the Shadow takes part in the action - he's a crime fighter, like the early Batman - a man of mystery. On the other hand, the Whistler is simply a narrator - and not, as the Nimrod above claims, some kind of invisible character within the drama. AT a certain point in each story, the Whistler interrupts the action to comment for the listeners on what is happening. There is no mystery as to why the characters can't hear him - he's not one of them!

The series itself is worth a listen to see if you like it. It's not the best, but not a stinker either.
Reviewer: Harry Wilson - favoritefavoritefavoritefavoritefavorite - December 22, 2016
Subject: Reply To Amanda2017
Hello, Amanda. I'd bet my second-last nickel that you're thinking of an Inner Sanctum episode entitled 'Skeleton Bay'. The script was done twice on that show, once on February 5, 1946, with the wonderful Betty Lou Gerson, then about four years later on January 30, 1950, with Charlotte Holland.

The second one is a good episode, but can't compare with Gerson's tour-de-force in the earlier one. Both episodes can be found on this page, numbers 54 and 126 in the player (you might have to copy and paste the link; my links never work in reviews).
https://archive.org/details/OTRR_Inner_Sanctum_Mysteries_Singles

P.S. When you're looking for a specific episode, but don't know the show, the OTR forum might be a better place; it might get more views.

http://archive.org/details/OTRR_Whistler_Singles
Reviewer: WhyDidYourRuinTheWhistler - favorite - November 19, 2012
Subject: Why Did You Ruin It
I was listening to The Whistler year-by-year one-by-one on my bookmarked page. Now, no years, so few episodes only 30 zip files with no references. You ruined a wonderful experience with your horrible changes.
Reviewer: nenslo - - June 10, 2012
Subject: Full list?
It would be extremely helpful to have a full listing of the contents of these. I have some 150 radio episodes and it would save a lot of hassle to know which discs I don't need to download, and what is on the discs with the videos.
Reviewer: Greybelt - favoritefavoritefavoritefavoritefavorite - April 26, 2012
Subject: The Whistler
Some visitors have wondered where the radio show ends and the video files begin. The radio shows are on CDs 1-17, and the video files are in 18 to the end.

Uploaded by OTRRArchive on April 5, 2012